Compare prices and find affordable car hire in Austin. We search among multiple suppliers to find the cheapest prices. Unlimited mileage, the necessary insurance and tax are included in the rate given. 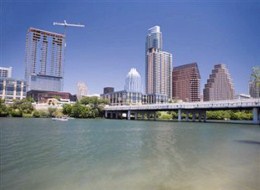 The city of Austin is the capital of the state of Texas. It is located in Central Texas along the edge of the American Southwest. It is listed as the fourth largest city in the state and the fourteenth in the United States in regards to population. The city boasts a population of 799,446 inhabitants (2011) and is 704 square kilometers in size. Because of the large number of entertainment venues in the city, the city of Austin is often referred to as the “Live Music Capital of the World.”

Some of the things to see include the beautiful University of Texas at Austin, the LBJ Presidential Library, and the Texas State Capitol.

The airport closest to the city of Austin is the Austin-Bergstrom International Airport (AUS). It is located 10.22 kilometers from Austin’s central business district. Airlines serviced by the Austin airport include Alaska Airlines, American Airlines, Delta Airlines, JetBlue Airways, Southwest Airlines, and United Airlines.