Compare prices and find affordable car hire in Charlotte. We search among multiple suppliers to find the cheapest prices. Unlimited mileage, the necessary insurance and tax are included in the rate given. 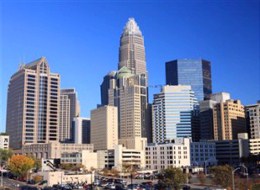 The city of Charlotte is the largest city in the state of North Carolina. The city boasts a population of 731,424 inhabitants (2010) and is 771 square kilometers in size. Based on its population, it is the seventeenth largest city in the United States. It is a primary financial center for the nation and the second largest banking center (New York City is the first).

There are numerous things to see and do in the city of Charlotte. There is The Mint Museum, Discovery Place, James K Polk Historic Site, and the Carolinas Aviation Museum. There are a number of venues for events as well, including the Bojangles’ Coliseum.

Annual events held in Charlotte include the Carolina Renaissance Festival, The Southern Christmas Show, and the Charlotte International Auto Show. Individuals who have a fondness of NASCAR can also take in some stock car racing at the Lowe’s Motor Speedway.

The primary airport serving the city of Charlotte, North Carolina is the Charlotte Douglas International Airport (CLT). It is a joint military-civil international airport located 9.22 kilometers outside the city. Aside from being the largest hub for US Airways; other airlines serviced at this airport include Lufthansa, JetBlue Airways, and United Airlines.