Compare prices and find affordable car hire in Cleveland. We search among multiple suppliers to find the cheapest prices. Unlimited mileage, the necessary insurance and tax are included in the rate given. 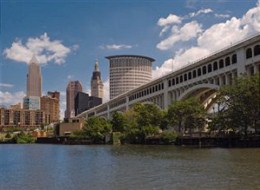 The city of Cleveland is the most populous city in the entire state of Ohio. Cleveland has a population of 396,815 inhabitants (2010) and is 213.4 square kilometers in size. It is located along the shore of Lake Erie. The city goes by numerous nicknames, including “The Forest City” and “The Rock ‘n’ Roll Capital of the World.”

Cleveland is known as a major international visitor hotspot because of things like the Cleveland Orchestra, Playhouse Square Center, Cleveland Museum of Art, HealthSpace Cleveland (the firt health museum in the nation), and the NASA Glenn Research and Visitors Center.

The main airport that offers its services to Cleveland, Ohio is the Cleveland Hopkins International Airport (CLE). It is located 16.19 kilometers outside of the city. Airlines serviced by this airport include Air Canada, American Airlines, Delta Airlines, Southwest Airlines, and United Airlines.