Compare prices and find affordable car hire in Columbus. We search among multiple suppliers to find the cheapest prices. Unlimited mileage, the necessary insurance and tax are included in the rate given. 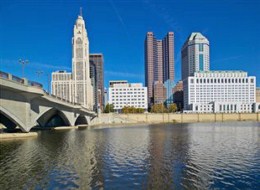 Some of the things to see include the Jack Nicklaus Museum, Ohio Village, Wyandotte Winery, and Ohio Craft Museum.

The closest airport to the city of Columbus is the Port Columbus International Airport (CMH). It is located just 9.7 kilometers from the center of downtown Columbus. It is mainly a passenger airport that offers 151 non-stop flights to 34 airports by 15 airlines on a daily basis. Airlines that service the airport include Air Canada Express, AirTran Airways, Delta Airlines, Southwest Airlines, United Airlines, and US Airways.