Compare prices and find affordable car hire in Dallas. We search among multiple suppliers to find the cheapest prices. Unlimited mileage, the necessary insurance and tax are included in the rate given. 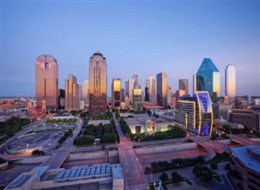 The city of Dallas is the third largest in the state of Texas and the ninth largest in all of the United States. Dallas boasts a population of 1,197,816 inhabitants (2010) and is 997.1 square kilometers in size. It is listed as an Alpha World City by the Globalization and World Cities Study Group and Network. It is a major financial and industrial center, as well as a major inland port city.

There is much to see and do in Dallas. Visitors during football season can see the Dallas Cowboys play, or during NBA season, see the Dallas Mavericks take on their opponent. There is also the Sixth Floor Museum, the Dallas Arboretum and Botanical Gardens, the Dallas World Aquarium, the Dallas Zoo, and the Zero Gravity Thrill Rides Amusement Park.

The Texas State Fair is held everywhere in Dallas, as well as Six Flags Hurricane Harbor, White Rock Lake, and a number of golf courses, and of course a rodeo show or two at the Mesquite Championship Rodeo.

The Dallas/Fort Worth International Airport (DFW) services the entire city of Dallas, Texas. It is located 25.4 kilometers from the center of the city. Airlines serviced by the airport include Virgin America, United Airlines, Lufthansa, KLM, JetBlue Airways, British Airways, and Air Canada.