Compare prices and find affordable car hire in Fresno. We search among multiple suppliers to find the cheapest prices. Unlimited mileage, the necessary insurance and tax are included in the rate given. 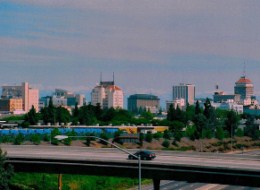 Fresno is a city located in central California. It is the fifth largest city in the state with a population of 510,365 inhabitants (2010). The city is also 290.877 square kilometers in size. Many people stop in Fresno when going on to Yosemite National Park or Sequoia and Kings Canyon National Parks, as well as other locations in the Sierra.

There are many things to see and do while visiting Fresno, including the Forestiere Underground Gardens, the Nonini Winery, Back Country Off Road Tours. For families, there is also Blackbeard’s Family Fun Center and Island Water Park.

There are a number of festivals and parades in Fresno as well. In March there is the Rogue Festival, which showcases local and national artists and performers. Other events include the Tower District Mardi Gras Parade and Reel Pride.

The airport closest to the city of Fresno is the Fresno Yosemite International Airport (FAT), located just under six kilometers from the center of the city and 97 kilometers due south of Yosemite National Mark. It offers service to airline hubs around the Western United States as well as international flights to Guadalajara, Mexico. Airlines serviced include Aeromexico, Alaska Airlines, Allegiant Air, American Airlines, SkyWest Airlines, American Eagle, and Volaris.