Compare prices and find affordable car hire in Indianapolis. We search among multiple suppliers to find the cheapest prices. Unlimited mileage, the necessary insurance and tax are included in the rate given. 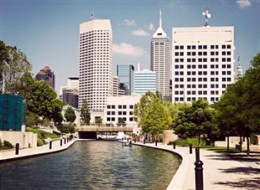 There are numerous events and festivals held annually, including the Vintage Indiana Wine and Food Fest, the Indiana State Fair, Oktoberfest, and Rib America Fest.

The city of Indianapolis is serviced by the Indianapolis International Airport (IND). It is located 11.76 kilometers outside of Indianapolis’ central business district. Airlines that service the airport include Air Canada, American Airlines, Delta Airlines, Southwest Airlines, and US Airways.