Compare prices and find affordable car hire in Kansas Airport. We search among multiple suppliers to find the cheapest prices. Unlimited mileage, the necessary insurance and tax are included in the rate given. 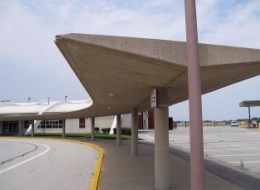 The main airport serving Kansas is the Wichita Mid-Continental Airport (ICT), located just southwest of the city of Wichita. It is listed as the busiest airport in all of Kansas. In 2008, 1,615,075 passengers were served by this airport. The airport mainly does regional air transport throughout the United States.

A new terminal at the airport is in plan for construction just west of the current terminal. It will be a two-story, 272,000 square foot terminal that will have a modern architectural design portraying Wichita’s primary position within the industry of aviation.

Between October of 2010 and September of 2011, the busiest domestic routes from the Wichita Mid-Continental Airport were Atlanta, Georgia; Denver, Colorado; Dallas, Texas; Chicago, Illinois; and Houston, Texas.

There are a few amenities in the Kansas Airport to help individuals out, including tourist information about the area, different ATMs, and car hire services that are offering up great prices on some really fine rental cars from various national companies.