Compare prices and find affordable car hire in Los Angeles. We search among multiple suppliers to find the cheapest prices. Unlimited mileage, the necessary insurance and tax are included in the rate given. 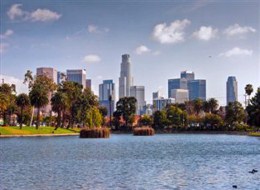 Los Angeles is located in California. It is the most populated city in the state and the second most populated city in the United States (right behind New York City). The City of Los Angeles, also known as “The City of Angels,” boasts a population of 3,792,621 inhabitants (2010) and is 1,301.97 square kilometers in size. It is a global center of international trade, culture, business, entertainment, fashion, media, education, technology, and science. It is the home of Hollywood, and therefore considered the “Entertainment Capital of the World.”

Aside from taking tours around Hollywood, there is much to see and do in Los Angeles. This includes the Museum of Contemporary Art, the Page Museum at La Brea Discoveries, Mulholland Drive, and Exposition Park.

Los Angeles also provides a great opportunity to see some sports, including the LA Dodgers, LA Lakers, and the LA Kings.