Compare prices and find affordable car hire in Louisville. We search among multiple suppliers to find the cheapest prices. Unlimited mileage, the necessary insurance and tax are included in the rate given. 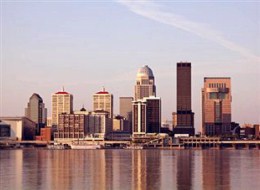 The city of Louisville, Kentucky is the largest city in the state. Louisville boasts a population of 741,096 inhabitants (2010) and is 1,032 square kilometers in size. Louisville is the home of the official baseball bat of major league baseball – the Louisville Slugger.

Many visitors love walking through Old Louisville because of all the beautiful architecture. There are many walking tours that provide the history to some of the most historic buildings. There are a number of museums including the Louisville Slugger Museum, the Kentucky Derby Museum, and the Louisville Science Festival.

Every year, Louisville is home to the annual Derby Festival. It occurs two weeks before the popular Kentucky Derby at Churchill Downs. There is a marathon, fireworks displays, a balloon race, a steamboat race, and then the Pegasus Parade.

There is also the St. James Court Art Show. Established more than 50 years ago, it is one of the largest art exhibitions in the United States, displaying art work from more than 600 artists.

The airport that services the city of Louisville, Kentucky is the Louisville International Airport (SDF). It is located 9.11 kilometers from the center of the city. Airlines servicing the airport include American Airlines, Delta Airlines, Southwest Airlines, and US Airways.