Compare prices and find affordable car hire in Milwaukee. We search among multiple suppliers to find the cheapest prices. Unlimited mileage, the necessary insurance and tax are included in the rate given. 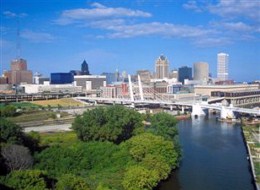 The city of Milwaukee is located in the state of Wisconsin. It is the largest city in the state and the twenty-eighth largest in terms of population in the United States. The city boasts a population of 594,833 inhabitants (2010) and is 251.7 square kilometers in size.

There are a number of attractions to see, including the Pabst Brewery Complex, Pabst Mansion, The Domes, the Milwaukee Art Museum, and the Milwaukee County Zoo.

Milwaukee is best known for their breweries. While numerous large scale operations have shrunk in the last decade, the city is still the “Brew City” with numerous microbreweries all around. It was once home to the largest breweries in the world – Pabst, Miller, Blatz, and Schlitz. Some places to see regarding this part of the city’s history include the Miller-Coors Brewing Company and the Lakefront Brewery. All breweries offer tours.

Festivals in Milwaukee include Firkin Craft Beer Festival, Jazz in the Park, and Juneteenth Fay.

The primary airport that services the city of Milwaukee is the General Mitchell International Airport (MKE). It is located eight kilometers from the city’s central business district. Airlines serviced by this airport include Air Canada, Delta Airlines, Frontier Airlines, Southwest Airlines, and US Airways.