Compare prices and find affordable car hire in New Orleans. We search among multiple suppliers to find the cheapest prices. Unlimited mileage, the necessary insurance and tax are included in the rate given. 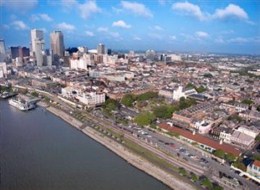 New Orleans is a major port city for the state of Louisiana as well as the largest city in the state. The city boasts 343,829 inhabitants (2010) and is 907 square kilometers in size. The city is most well known for its music (especially the genre of jazz), cuisine, and a number of festivals and celebrations, most notably Mardi Gras. While the city was hit hard during Hurricane Katrina, it could not be stopped and still remains one of the biggest tourist attractions in the United States.

French Quarter is the most famous as well as the most visited part of New Orleans, There are numerous restaurants, music clubs, antique shops, museums, and bars. Uptown New Orleans is known for its historic architecture, art galleries, antique stores, and clothing stops ranging from upscale to thrifty.

Individuals can take tours of some of the historic neighborhoods, go on riverboat cruises, take some bicycle tours, or even gamble in one of the local casinos. There are numerous places that teach people how to cook the local cuisine, creole food, when they go back home.