Compare prices and find affordable car hire in Norfolk. We search among multiple suppliers to find the cheapest prices. Unlimited mileage, the necessary insurance and tax are included in the rate given. 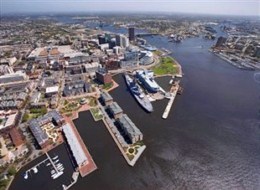 The city of Norfolk is an independent city located in Virginia. It is the second largest city in the state. It boasts a population of 242,803 inhabitants (2010) and is 96.3 square miles in size. The city has remained important as a strategic transportation and military point. It is home to the largest naval base in the world – the Norfolk Naval Base. The North Atlantic Treaty Organization (NATO) has its defense headquarters in the city.

Things to see while in Norfolk include a Naval Station Tour, the Virginia Zoo, the Chrysler Museum of Art, the Norfolk Botanical Garden, and the Nauticus – National Maritime Center. Visitors can also take a Spirit of Norfolk Cruise around the area, including around the naval base.

Many people come into Norfolk because is it a major port city for a number of cruises to Bermuda and the rest of the Caribbean islands.

The city of Norfolk, Virginia is primarily serviced by the Norfolk International Airport.  It is located approximately 5.5 kilometers from the city’s central business district. Some of the airlines that take-off and land at the airport include American Airlines, Delta Airlines, Southwest Airlines, and US Airways.