Compare prices and find affordable car hire in Phoenix. We search among multiple suppliers to find the cheapest prices. Unlimited mileage, the necessary insurance and tax are included in the rate given. 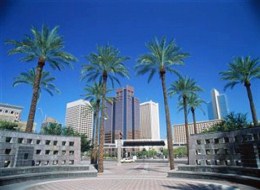 The city of Phoenix is the capital of the state of Arizona as well as the largest city in the state and the sixth most populated city in the United States. Phoenix boasts a population of 1,445,632 inhabitants (2010) and is 1,341.5 square kilometers in size. It is the main transportation, economic, political, and cultural center for the city.

Some of the places to visit while staying in Phoenix include the Arizona Science Center, the Desert Botanical Garden, Pueblo Grande Museum and Archaeological Park, the Phoenix Art Museum, and the Ro Ho En Japanese Friendship Garden. There is also the Sea Life Aquarium, Desert Storm Hummer Tours, the Arizona Grand Spa, and the Arizona Grand Golf Course.

Some events held annually in Phoenix include the Phoenix Film Festival, the PF Changs Rock ‘n’ Roll marathon, Ford Ironman Arizona, and the Fiesta Bowl and the University of Phoenix Stadium.

The city of Phoenix is serviced by the Phoenix Sky Harbor International Airport (PHX). It is located 4.8 kilometers from the central business district in the city.