Compare prices and find affordable car hire in Portland. We search among multiple suppliers to find the cheapest prices. Unlimited mileage, the necessary insurance and tax are included in the rate given. 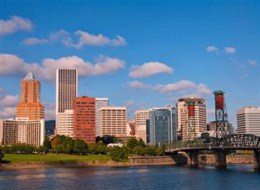 Portland is a beautiful city located along the Pacific Northwest in the state of Oregon. It is the most populated city in the state. It boasts a population of 583,776 inhabitants (2010) and is 376.5 square kilometers in size. Portland has earned the nickname “The City of Roses” because its climate is ideal for growing this type of flower. At the International Rose Test Garden, individuals test out different strains of roses.

There is a lot to see and do while in Portland, including the Oregon Museum of Science and Industry, the Portland Art Museum, and Portland Underground. There are numerous neighborhoods that are all interesting and unique, including downtown, the Waterfront, Old Town, Chinatown, Pearl District, Jamison Square, and Hawthorne Boulevard. There is also numerous gardens and parks, including the Grotto Gardens, Lan Su Chinese Garden, Mount Tabor Park, and the Tom McCall Waterfront Park.

The city of Portland, Oregon is serviced by the Portland International Airport (PDX). It is around 19 kilometers from the downtown area of Portland. Some of the airlines serviced by this airport include Air Canada, Alaska Airlines, American Airlines, Delta Airlines, JetBlue Airways, United Airlines, and US Airways.