Compare prices and find affordable car hire in Reno. We search among multiple suppliers to find the cheapest prices. Unlimited mileage, the necessary insurance and tax are included in the rate given. 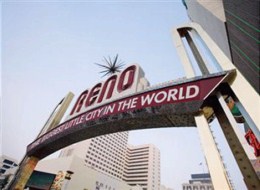 Reno is a city located in the state of Nevada. It is the second most populated city (after Las Vegas). The city boasts a population of 225,221 inhabitants (2010) and is 179.6 square kilometers in size. Reno is commonly known as “The Biggest Little City in the World” and is very well known for its multitude of casinos.

Aside from gambling, there are numerous other attractions in Reno. This includes the Nevada museum of Art, California Avenue, Rancho San Rafael Park, Victorian Square, and South Wells Avenue.

Because tourism is a primary focus of the city, there are numerous events and festivals throughout the year, including the Great Reno Balloon Race, Hot August Nights, Beat in the West Nugget Rib Cook-off, Street Vibrations, and Reno Rodeo. The Nevada State Fair is also held in Reno, as well as the Brews and Blues Festival.

The city of Reno, Nevada is serviced by the Reno-Tahoe International Airport (RNO). It is located six kilometers from Reno’s central business district. Some of the airlines serviced by this airport include Alaska Airlines, American Airlines, Delta Airlines, Southwest Airlines, and US Airways.