Compare prices and find affordable car hire in Sacramento. We search among multiple suppliers to find the cheapest prices. Unlimited mileage, the necessary insurance and tax are included in the rate given. 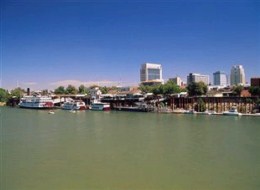 The city of Sacramento is the capital of the state of California. It is the sixth largest city in the state and a primary economic and cultural center. The city boasts a population of 466,488 inhabitants (2010) and is 259.27 square kilometers. It is the oldest incorporated city in the state and has a bit of a slower pace of life than most of California. It is also one of the most diverse cities in the United States.

Some of the attractions housed in Sacramento include the California State Capitol, Sutter’s Fort, the State Indian Museum, and Crocker Art Museum. It is also home to the famous Sacramento Zool. Some of the things to do include a Certified Farmers Market, Concerts in the Park, the Sacramento Jazz Festival and Jubilee during Memorial Day weekend, river rafting, and the Sacramento Gold Rush Days. The city is also home to the California State Fair, Raging Waters, and the American River Bike Trail.

The city of Sacramento, California is serviced by the Sacramento International Airport (SMF). It is located 16 kilometers from the city’s central business district. Airlines that are serviced by this airport include American Airlines, Delta Airlines, JetBlue Airways, United Airlines, and US Airways.