Compare prices and find affordable car hire in Salt Lake City. We search among multiple suppliers to find the cheapest prices. Unlimited mileage, the necessary insurance and tax are included in the rate given. 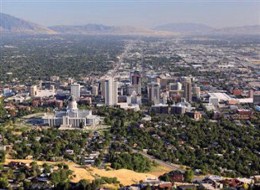 Salt Lake City is the capital of the state of Utah as well as the most populated city in the state. The city boasts a population of 186,440 inhabitants (2010) and is 285.9 square kilometers in size. It is the headquarters of the Church of Jesus Christ of Latter-day Saints, a Mormon Church. It was also home to the 2002 Winter Olympic Games.

Some of the attractions to see and do include the Utah State Capitol Building, the Salt Lake City Main Library, Sugar House, and This Is The Place Heritage Park. There is also the Hogle Zoo, Clark Planetarium, the Utah Museum of Natural History, the Utah Museum of Fine Arts, the Living Planet Aquarium, and the Rice Eccles Olympic Stadium.

The most popular attraction in Utah is Temple Square. It is where the headquarters for the LDS Church as well as the primary Salt Lake Temple.