Compare prices and find affordable car hire in San Antonio. We search among multiple suppliers to find the cheapest prices. Unlimited mileage, the necessary insurance and tax are included in the rate given. 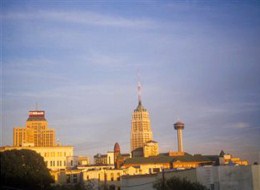 The city is also home to a number of sports teams, including the NBA San Antonio Spurs, who are four-time NBA champions. They play at the AT&T Center in the city.

The city of San Antonio, Texas is serviced by the San Antonio International Airport (SAT).