Compare prices and find affordable car hire in San Jose. We search among multiple suppliers to find the cheapest prices. Unlimited mileage, the necessary insurance and tax are included in the rate given. 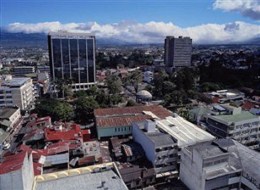 The city of San Jose, California is the third largest in the state and the tenth largest in the United States. It boasts a population of 945,942 inhabitants (2010) and is 466.11 square kilometers in size. San Jose is known as the Capital of Silicon Valley because of its ever growing local technology industry, with numerous companies making their home there, including Adobe Systems, eBay, and Cisco Systems.

Inside downtown San Jose, there is an eclectic mix of hotels, restaurants, shopping opportunities, business offices, and night clubs. There is also the San Pedro Square Farmer’s Market on Fridays, the Tech Museum, the San Jose Museum of Art, and the Dr. Martin Luther King Jr. Library. There is also a number of attractions outside downtown San Jose as well, including the Winchester Mystery House, the Rosicrucian Egyptian Museum and Planetarium, the Heritage Rose Garden, and Santana Row, which is a European style village with a number of boutiques, restaurants, hotels, and night clubs.