Compare prices and find affordable car hire in Tucson. We search among multiple suppliers to find the cheapest prices. Unlimited mileage, the necessary insurance and tax are included in the rate given. 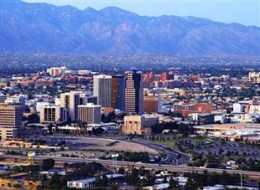 Tucson is a city located in the state of Arizona and is only 98 kilometers north of the United States – Mexico border. The city boasts a population of 520,116 inhabitants (2010) and is 505.3 square kilometers in size. Tucson is known for the wide array of different cultures present in the city, including Native American, Mexican, Asian, and European.

Events held annually in Tucson include the Gem Show during the winter and the Winterhaven Festival of Lights during the Christmas season.

The city of Tucson, Arizona is serviced by the Tucson International Airport (TUS). This joint civil-military airport is located ten kilometers from Tucson’s central business district It services a number of airlines, including American Airlines, Delta Airlines, Southwest Airlines, United Airlines, and US Airways.