Compare prices and find affordable car hire in Albuquerque. We search among multiple suppliers to find the cheapest prices. Unlimited mileage, the necessary insurance and tax are included in the rate given. 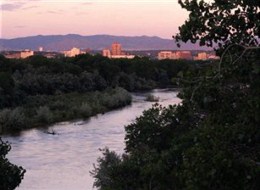 The city of Albuquerque is located in the state of New Mexico. It is the largest city in the state, boasting a population of 545,852 inhabitants. This also makes it the thirty-second largest city in the United States. It is 468.5 square kilometers in size. Albuquerque is home to the University of New Mexico, Petroglyph National Monument, Sandia National Laboratories, and part of the Rio Grande.

Some of the attractions to see in Albuquerque include the Albuquerque Biological Park, the Rio Grande Zoo, Albuquerque Aquarium, Indian Pueblo Cultural Center, and the National Museum of Nuclear Science and History.

The Albuquerque International Balloon Fiesta is well known as the largest ballooning even in the world. It is also one of the most photographed events. It is a cultural landmark for the city. Held for nine days during the month of October, there are hundreds of balloons and is an amazing site to see.

The city of Albuquerque is serviced by the Albuquerque International Sunport (ABQ). It is located 6.2 kilometers from the center of the city. It is the largest commercial airport in New Mexico.