Compare prices and find affordable car hire in Albuquerque Airport. We search among multiple suppliers to find the cheapest prices. Unlimited mileage, the necessary insurance and tax are included in the rate given. 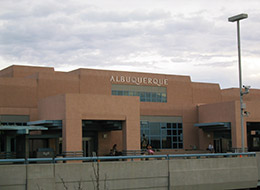 The airport has one terminal with 25 gates in three separate concourses.

Some of the airlines that service the airport include American Airlines, Delta Airlines, Southwest Airlines, United Airlines, US Airways, New Mexico Airlines, and Frontier Airlines.

The cargo airlines that go to and from the airport are UPS Airlines and FedEx Express.

Once inside the Albuquerque International Sunport, there are a few amenities that travelers may be interested in. These amenities include tourist information, car rental kiosks, shopping boutiques and restaurants, and ATM machines to withdraw money for the trip.