Compare prices and find affordable car hire in Atlanta. We search among multiple suppliers to find the cheapest prices. Unlimited mileage, the necessary insurance and tax are included in the rate given. 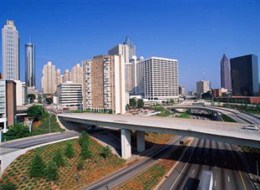 Atlanta is the capital city of Georgia. It is also the most populated city in the state with 420,003 inhabitants (2010). The city is 343.0 square kilometers in size. It is Georgia’s economic and culture center. It is known for its number of cultural institutions, educational opportunities, entertainment, and gentrification of a number of neighborhoods around the city. It is also known for its elegance and charm, well noted in the south.

All the districts within Atlanta, including Downtown, Midtown, Buckhead, East Atlanta, South Atlanta, and West Atlanta, have their own charm and sights to see. There are numerous museums in Atlanta, including the World of Coca-Cola Museum, the Georgia Aquarium, the Martin Luther King Jr. National Historic Site, and the Atlanta History Center, which has an entire part dedicated to the 1996 Centennial Olympic Games.

Atlanta is also known for hosting a number of festivals, including Dragon*Con (a Sci-Fi and Fantasy convention), the Atlanta Dogwood Festival (a family oriented festival), and the Atlanta Film Festival.

The airport closest to the city of Atlanta, Georgia is the Hartsfield – Jackson Atlanta International Airport (ATL). It is located 12.6 kilometers outside of Atlanta’s central business district.