Compare prices and find affordable car hire in Atlanta Airport. We search among multiple suppliers to find the cheapest prices. Unlimited mileage, the necessary insurance and tax are included in the rate given. 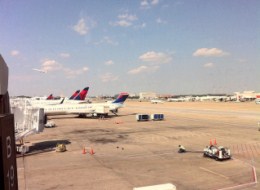 The Hartsfield – Jackson Atlanta International Airport (ATL), known to many locals as just the Atlanta Airport, Hartsfield – Jackson, or the Hartsfield Airport, is located approximately 11 kilometers from Atlanta’s central business district. It is considered the busiest airport in terms of passenger traffic and total number of take-offs and landings around the globe since the year 2005. In 2010, the airport recorded 89,331,622 passengers. Most of the flights of the flights are domestic, but service is also provided to South America, Europe, Africa, and Asia.

The airport is a main hub for a number of airlines – ExpressJet, Delta Airlines, and AirTran Airways. The Delta hub is the largest airline hub around the world. Other airlines that service this airport include Air France, American Airlines, Alaska Airlines, British Airways, KLM, Lufthansa, Southwest Airlines, United Airlines, and US Airways.

Within the Atlanta Airport there are a number of services that guests of the airport are able to take advantage of, including restaurant options, ATMs, shopping opportunities, national and international car hire services, information kiosks, and currency exchange centers.