Compare prices and find affordable car hire in Chicago. We search among multiple suppliers to find the cheapest prices. Unlimited mileage, the necessary insurance and tax are included in the rate given. 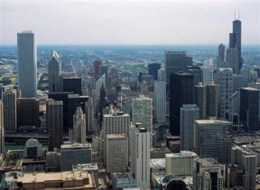 Chicago is the largest city in the state of Illinois. The city is known as “The Windy City” because of its weather and its close proximity to Lake Michigan. It is the largest city in the Midwest and the third most populated city in the United States (after NYC and LA). The city boasts a population of 2,695,598 inhabitants (2010) and is 606.1 square kilometers in size. It is a hub for finance and business and is an economically powerful city. It is also the home to blues and jazz musical genres. It is known for its picturesque skyline, sandy beaches, large parks, top class museums, and some of the best collections of modern architecture found anywhere.

Things to see in Chicago include the Adler Planetarium, the Field Museum of Natural History, Grant Park, and Washington Park.

Chicago holds a number of festivals throughout the year, including Blues Fest, Taste of Chicago, Jazz Fest, and Lollapalooza.

The airport closest to the city of Chicago is the O’Hare International Airport (ORD). It is located 25.48 kilometers from the city. Airlines that service the airport include United Airlines, Lufthansa, KLM, JetBlue Airways, Delta Airlines, British Airlines, and American Airlines.