Compare prices and find affordable car hire in Fort Lauderdale. We search among multiple suppliers to find the cheapest prices. Unlimited mileage, the necessary insurance and tax are included in the rate given. 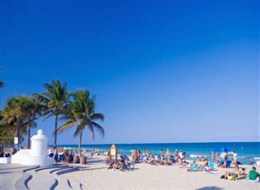 Fort Lauderdale is a popular city located in Florida and along the Atlantic coast. The city boasts a population of 165,521 inhabitants (2010) and is 93.3 square kilometers in size. It is often considered the “Venice of America” because of the large canal system. Fort Lauderdale is most well known for all the exquisite beaches and the numerous boats.

The city is also known as a “shopper’s paradise.” There are numerous malls, flea markets, and boulevards lined with boutiques. This includes the Shops on Las Olas Boulevard, Galleria Mall, Boca Town Center, the Swap Shop, and Aventura Mall.

Fort Lauderdale Beach, also known as The Strip, is the most popular beach in the city. It is filled with a number of bars and restaurants, and offers a plethora of opportunities regarding beach sports. In the downtown area of Fort Lauderdale, there are a number of museums and performing arts center.

Fort Lauderdale is serviced by the Fort Lauderdale – Hollywood International Airport (FLL). It is located 5.57 kilometers from the city’s central business district. Some of the primary airline carriers that service this airport include JetBlue Airways, Caribbean Airlines, American Airlines, and United Airlines.