Compare prices and find affordable car hire in Fort Lauderdale Airport. We search among multiple suppliers to find the cheapest prices. Unlimited mileage, the necessary insurance and tax are included in the rate given. 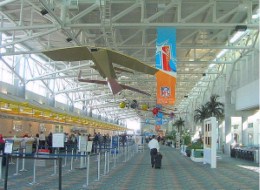 Fort Lauderdale – Hollywood International Airport (FLL) is located five kilometers from Fort Lauderdale’s central business district and 33.7 kilometers from the city of Miami. This airport is a focus city for Caribbean Airlines, JetBlue Airways, and Allegiant Air. It is also the largest base for Spirit Airlines. In 2010, the total number of passengers who traveled through this airport was 22,412,627 people.

If someone needs something while they are in the Fort Lauderdale Airport, there are a number of amenities to select from, including currency exchange centers, ATMs, restaurants, shopping opportunities, tourist information kiosks, and car hire services providing options of different rental cards for the visit.