Compare prices and find affordable car hire in Honolulu. We search among multiple suppliers to find the cheapest prices. Unlimited mileage, the necessary insurance and tax are included in the rate given. 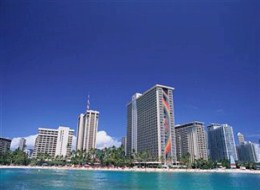 The beautiful Hawaiian city of Honolulu is the capital of the state as well as the most populated city. The city is located on the island of Oahu. It boasts a population of 390,738 inhabitants (2010) and is 3,050.5 square kilometers in size. It is the major financial city in the Pacific Ocean as well as the commerce, transportation, and governmental center for Hawaii.

Honolulu houses the most popular tourist destination in all of Hawaii – Waikiki Beach. It is full of resort hotels, white sandy beaches, water sports, blue water, and great restaurants. It is where a majority of visitors stay when in the city.

Because Honolulu is the sight of Pearl Harbor, there are a number of military memorials to the 2,000 soldiers who lost their lives. The centerpiece of the memorial is a USS Arizona Memorial that was built atop the USS Arizona, which was the resting place for many soldiers who died. Other attractions in the area include the Pacific Aviation Museum and the Battleship Missouri Memorial. There is also the National Memorial Cemetery of the Pacific.

The airport that services the city of Honolulu, Hawaii is the Honolulu International Airport (HNL). It is located 6.74 kilometers from the center of the city. It is the busiest airport in all of Hawaii.