Compare prices and find affordable car hire in Honolulu Airport. We search among multiple suppliers to find the cheapest prices. Unlimited mileage, the necessary insurance and tax are included in the rate given. 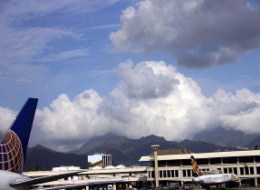 The Honolulu International Airport (HNL) is the primary aviation gateway for not just Honolulu but also the entire state of Hawaii. It tends to be listed as one of the busiest airports in the entire nation. In 2010, total passenger traffic at the Honolulu International Airport was listed as 18,443,873 individuals. The airport is located three miles outside the central business district of Oahu.

The top five busiest domestic routes in 2010 are Los Angeles, California, and then Kahului, Ligue, Kona, and Hilo in Hawaii.

Once inside the Honolulu Airport, there are quite a few amenities that travelers may be interested in. These amenities include tourist information, car rental kiosks, shopping boutiques and restaurants, and ATM machines to withdraw money for the trip.