Compare prices and find affordable car hire in Philadelphia. We search among multiple suppliers to find the cheapest prices. Unlimited mileage, the necessary insurance and tax are included in the rate given. 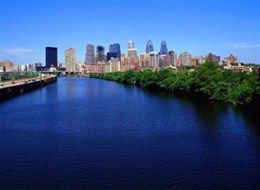 The city of Philadelphia, Pennsylvania is the largest in the state and the fifth most populated city in the United States. The city boasts a population of 1,526,006 inhabitants (2010) and is 369.3 square kilometers in size. The city goes by a number of nicknames, including “Philly” and “The City of Brotherly Love.” The city is well known for its culture and arts. The city is synonymous with the soft pretzel and the cheesesteak sandwich.

Things to see and do while in Philadelphia include Fairmount Park, Philadelphia’s Magic Gardens, the Franklin Institute Science Museum, National Museum of American Jewish History, and the Independence Seaport Museum. Other things to see include Independence National Historic Park, Edgar Allan Poe National Historic Site, and Eastern State Penitentiary, which is one of the most historical prisons in the United States.