Compare prices and find affordable car hire in Philadelphia Airport. We search among multiple suppliers to find the cheapest prices. Unlimited mileage, the necessary insurance and tax are included in the rate given. 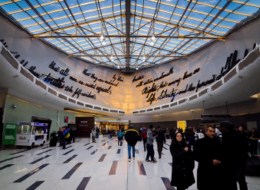 The Philadelphia International Airport (PHL) is a large airport located in Delaware Valley. In 2010, the airport handled 30,775,961 passengers. It also handled 460,779 aircraft operations (landings and take-offs).

The primary airline at the Philadelphia International Airport is US Airways and offers destinations throughout the United States and Canada, as well as Europe, Latin America, and the Middle East. Other airlines that have operations at this airport include Air Canada, American Airlines, AirTran Airways, British Airways, Caribbean Airlines, Delta Airlines, Southwest Airlines, United Airlines, and Frontier Airlines.

Once inside the Philadelphia Airport, there are quite a few amenities that travelers may be interested in. These amenities include tourist information, car rental kiosks, shopping boutiques and restaurants, and ATM machines to withdraw money for the trip.