Compare prices and find affordable car hire in Seattle Airport. We search among multiple suppliers to find the cheapest prices. Unlimited mileage, the necessary insurance and tax are included in the rate given. 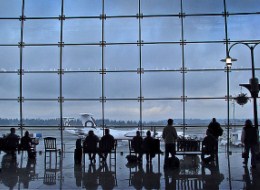 he Seattle – Tacoma International Airport (SEA), which is also known as the Sea-Tac Airport, or just Sea-Tac, services the cities of Seattle and Tacoma, Washington, as well as the western part of the state. It is the eighteenth busiest airport within the United States in terms of passenger traffic. In 2010, there were 31,553,166 passengers that arrived and flew off from the Seattle – Tacoma International Airport.

The airport is a main hub for Alaska Airlines. It was one of the top carriers in 2010 in terms of passengers with 34.9 percent of all flights. The other four airline carriers were Horizon Air (14.1 percent), Delta Airlines (10.9 percent), Southwest Airlines (8.7 percent), and United Airlines (6.6 percent). Other airlines that provide services to the Seattle – Tacoma International Airport include Air Canada, Air France, American Airlines, British Airways, Hawaiian Airlines, JetBlue Airways, Lufthansa, Korean Air, and Virgin Atlantic.

Once inside the Seattle Airport, there are quite a few amenities that travelers may be interested in. These amenities include tourist information, car rental kiosks, shopping boutiques and restaurants, and ATM machines to withdraw money for the trip.