Compare prices and find affordable car hire in Houston Airport. We search among multiple suppliers to find the cheapest prices. Unlimited mileage, the necessary insurance and tax are included in the rate given. 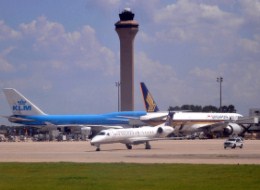 The Houston Airport, named the George Bush Intercontinental Airport (IAH) is listed as a Class B international airport located just outside of northern downtown Houston, Texas. In 2010, the airport handled 40,479,569 passengers, putting it on the list as the seventh busiest airport in terms of total passengers throughout North America. In the year 2006, the United States Department of Transportation listed the George Bush Intercontinental Airport as one of the fastest growing airports in the United States.

This Houston airport is the largest hub out of all United States airports for United Airlines. Other airlines serviced by this airport include, Air Canada, Air France, American Airlines, British Airways, Delta Airlines, KLM, Lufthansa, and VivaAerobus.

Once inside the Houston Airport, there are quite a few amenities that travelers may be interested in. These amenities include tourist information, car rental kiosks, shopping boutiques and restaurants, and ATM machines to withdraw money for the trip.